Today we started our study of the letter “T” by doing some turtle themed activities.  I was so thankful that my son was able to join us for preschool this morning.  He is doing much better today.

We started our morning by reading the book Turtle Splash!: Countdown at the Pond

by Cathryn Falwell.  This story counts backwards from ten as turtles one by one splash into the water.  It was a really cute story and the children all wanted to count how many turtles were on each page.

After our story we sang this cute turtle song I found at this site.

I’m a Little Turtle
(to the tune of “I’m a Little Tea Pot”)
I’m a little turtle,
I crawl so slow,
And carry my house
Wherever I go.
When I get tired
I pull in my head,
My legs and my tail,
And go to bed! 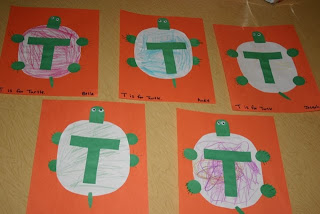 After our song we made turtles with the letter “T” on their backs. 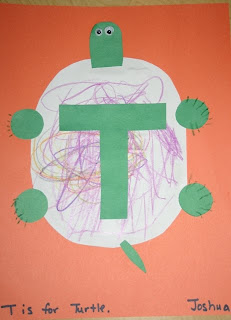 To make the turtles I first gave each child a white oval to color.  Then they glued a pre-cut letter “T” onto it.  After that they glued the oval to a piece of construction paper.  This was the turtle’s shell.  Then they glued 4 pre-cut circles to the shell to serve as feet as well as a tail and head.  They finished their turtles by adding wiggly eyes and claws drawn with crayons. 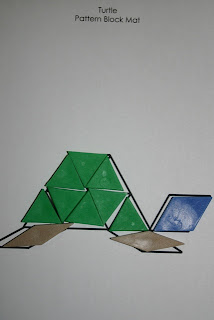 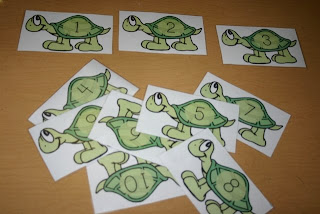 I had two turtle themed center activities today.  The first was numbered turtles from Confessions of a Homeschooler.  She suggested clipping the correct number of jumbo paper clips to each turtle.  I just had the children put the turtles in order today, but am going to set out some beans later this week and see if they can put the correct number on each turtle. 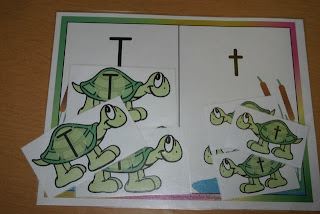 We finished our morning by playing the classic game of “Telephone” which was absolutely hilarious.  My son said “Polar Express” each time no matter what the person told him to say.

I also made up a game that I called “Ten and Two”.  It was nothing more than having the children do two of something and then ten of something.  For example, I asked them to take two giant steps, and then take ten tiny steps.  Another example was that I asked them to turn two times and then twist ten times. I was basically trying to come up with some way to use our letter of the day to have the children follow directions.  They thought it was fun.

We had a great day and will continue our study of the letter “T” on Wednesday.