I have wanted to learn to crochet for quite a while, but was never industrious enough to teach myself. I had tried to have my grandma teach me about four years ago, but all I learned was the chain stitch. She passed away a few months later. I inherited all of her crochet hooks, and they have been in a box ever since. Now that I am sitting a lot more (because I am nursing the baby) I decided to try to learn. I looked at some sites on the web. Here is one that had lots of useful info. http://www.nexstitch.com I also bought a book by Leisure Arts at Joann’s called 10-20-30 Minutes to Learn to Crochet. I got it because it wasn’t too expensive (used my coupon) and had pretty good drawings and instructions.

I also bought a blue Pound of Love and a skein of Paton’s Merino Wool. I have to say that if I can afford it I will try to use wool as much as possible.

I have had a lot of time over the last two weeks to sit and crochet while I nurse the baby and all of the kids have been sick for the last week. So, I decided to start right in and make a baby blanket for the baby. It came out wonky (the picture kind of hides that), but it is snuggly. I learned a lot. I used a double crochet stitch. I then made a hat which I really enjoyed. I also made some booties to go with it. I found the pattern for the booties at Bev’s Country Cottage. Bev’s Country Cottage – (FREE patterns for humanitarian, home and family!) I can’t remember offhand where I found the hat pattern. Below is a picture of all of them. 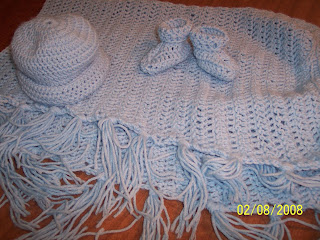 Here is a modeling shot of my baby wearing the hat and blanket. He is 8 weeks now and such a joy. He is getting so big as well (almost 15 pounds). I also made a wool diaper wrap to go over his cloth diapers. I used the Tickle Turdle pattern from this site. http://www.tickleturdle.com/wrappattern.html 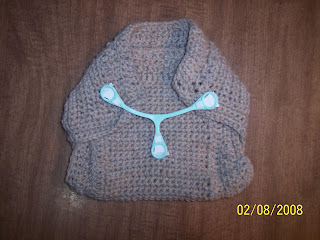 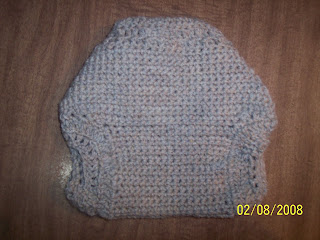 Thanks for looking. Now, I need to get to some of my sewing projects that have been on the back burner since before Christmas. I think I will make a holder for my crochet hooks next, and maybe a bag to hold my current projects and hooks. If only there were enough hours in the day. 🙂