Today we finished our study of the letter “K”, the color grey and triangles. Two of my students were absent again, but I am hopeful everyone will be healthy for our Thanksgiving celebration on Monday. Below are some of the highlights of our morning.

First, I read the Three Little Kittens nursery rhyme that I printed from Enchanted Learning. I encouraged the children to act out the story, and I think they had fun pretending to be kittens. 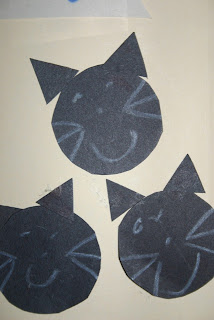 Next, we made three little kittens to put in their folders. They were made simply from tracing a milk jug lid to make a circle, using a white crayon to draw faces, and small triangles for ears. These kittens went into their letter “K” folders. 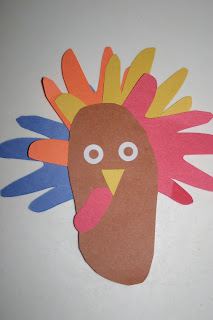 Later, we made handprint and footprint turkeys. To make the turkeys I helped the children trace their hands and feet onto paper and then cut them out. I stapled their handprints together to make it easier for them to glue on their footprint. The eyes were reinforcement stickers for 3 ring binder paper, and the beak and waddle were cut from scraps. I think they turned out cute, and as a parent I love any craft made with my children’s handprints and footprints. 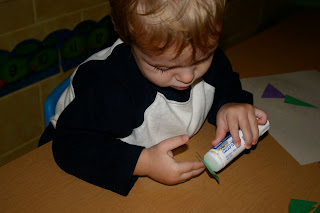 I saw an idea on this blog (Allison of NTFFC‘s other blog.) earlier this week and thought it would be a fun activity for the children. So, I cut out lots of colorful triangles and set them on the table with some paper, glue sticks and crayons. The children had fun creating triangle collages. My almost two year old loves glue sticks, so this activity was a hit with him as well. As you can tell from the picture he was very into his work. 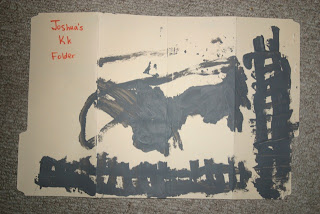 I sent home the children’s letter “K” folders today. They had painted the fronts of the folders on Wednesday with grey paint. My son made train tracks and a train station because he loves trains. 🙂 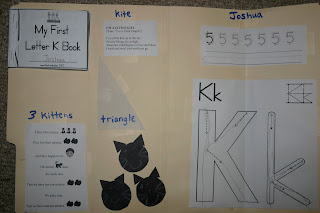 Inside their folders was their letter “K” mini book and tracing paper from First School, a number five tracing paper from this site, a triangle, their 3 little kittens, the first part of the Three Little Kittens poem from the link above, and a kite song from Wednesday.

I have to say that I am feeling like my creativity is lacking with their folders. I am not sure that the folders are serving the purpose that I had hoped they would. However, I have gone this far, so we will continue on through the alphabet with the hope that I can utilize this idea better.

We had a good morning, and I am looking forward to doing some Thanksgiving activities with the children on Monday. Have a great weekend and thanks for making me feel like I am not just talking to myself here. 🙂