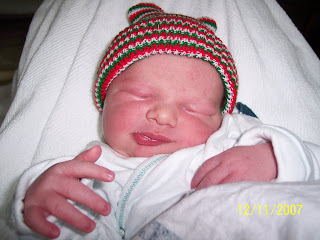 The journey to have our new baby started 18 months ago. I became pregnant in June of 2006, but I miscarried at 13 weeks in September of 2006. I lost over 3 pints of blood and there was concern for my health. The thought of not being able to bear more children was very hard, but I focused on getting myself as healthy as possible. We used natural family planning to see if I was ovulating at all and to avoid getting pregnant before I was physically ready. I had thought I should wait a year before we tried again. However, in early March 2007 I started hearing God telling me not to wait that long. He said I would have another baby. So, I watched my fertility signals, and realized that I ovulated before I thought I had. I thought I might have to wait for another month. I was wrong.

I found out I was pregnant in April when I had just missed my period. I was so overjoyed yet I was scared. I kept focusing on the fact that God had told me I would have this baby. The months went by quickly, and the miracle of the little life growing inside of me was such a beautiful experience. I have been pregnant 8 times, but have only carried 4 to full term. Still, each time I am so amazed at the process of pregnancy and childbirth. God is so awesome to have allowed me to have such a wonderful family.

On Monday night, December 10th, I felt like something wasn’t right. I was irritable and just wanted to be alone before I went to bed. My husband now says he can pretty well pinpoint when I will go into labor because of my mood right before. I just knew no one would be able to stand me if I didn’t go into labor until my due date of December 24th.

I woke up at 6:45 a.m. on December 11th like I normally do. I rolled over and realized my underwear was wet. I was pretty sure I hadn’t wet the bed, and decided my water had broken. It was not a gush of fluid, but I knew that December 11th was going to be the day our baby would enter the world. I wasn’t having labor contractions yet. I called my mom and told her I needed her to come over with my dad. I talked to my husband and he was almost to work. He went in and made sure his lesson plans were in order and got a substitute. He then started the 45 minute drive home. I got breakfast for the kids and walked my daughter to the bus. I even folded some laundry and tidied the house.

My parents got to my house by 7:40 a.m. or so. My mom decided that by 8:00 a.m. we needed to head to the hospital. It was a very foggy day and it was going to take us a while. My husband came home, changed, and then headed to the hospital a little later. He had been on the road for about 2 hours by the time he got to the hospital. My dad stayed with the boys and had instructions to get Julia from school when we called because she wanted to be with me for the birth.

We got to the hospital around 8:45 a.m. My mom dropped me off at the door. When I stood up to get out of the van amniotic fluid gushed out. Thankfully, I was wearing a pad. I went to the front desk to check in. I couldn’t sit down and felt like the head was pretty low. I got back into the labor/delivery area and my midwife was there waiting on me. She and another nurse checked the baby’s heartbeat, and my blood pressure, etc. Everything looked good, and I allowed her to see how far I was dilated. I was 3 cm. She said she wouldn’t check me again until I felt like pushing.

They did start an IV and gave me a dose of antibiotics because of the positive Group B Strep test. I had done research for a week and had decided that I wouldn’t do the antibiotics. However, my baby’s doctor would not have let us go home until the baby was over 48 hours old if I didn’t have the antibiotics in for 4 hours before he was born. The thought of being in the hospital that long was too much, so I consented to the antibiotics. I felt like it was worth it at that point.

I was allowed to walk around as long as I felt good. I did that for quite a while. The contractions started getting more intense the longer I was on my feet. I felt good and was in a really good humor in between contractions. It was so freeing not to be continuously monitored and to be able to move around. I would go back to the room to use the bathroom periodically and my midwife would listen to the baby and see how I was doing. She was on call that day, so she was able to stay at the hospital the whole time I was in labor. I was so glad. I had only seen the other midwife once and wasn’t comfortable with her yet. I had never received such good care during a pregnancy and labor as I did with my certified nurse midwife. She was wonderful.

At some point my midwife got out a birth ball for me to try. I sat on that for a long time. It really helped me to keep moving during the contractions, but not get worn out by standing too much. I was able to have good control over the contractions and really felt good. My daughter Julia came into the room when I was getting close to the end of my labor. She held my hand and was so sweet. I kept asking her if she was sure she wanted to be in there and she said yes.

They gave me a second dose of antibiotics when it had almost been 4 hours since the first dose. I was starting to feel like we were near the end. I said I thought I was feeling like pushing. The midwife had me get into the bed and see what I felt like doing. I laid on my left side for a contraction. She lowered the bottom of the bed, so I wasn’t lying flat. I instinctively rolled onto my back, and the midwife said I was completely dilated. I started pushing at that point. I pushed through the first 2 contractions, and on the third I just kept going until the baby was out. I do make noise when I push which I know can be considered counter-productive, but for me it really works.

I had my husband tape the birth because I have never seen one of my babies be born. I usually end up closing my eyes when I push. My mom stood next to Julia, who was at my head. I did reach down this time to touch the baby as he was being born. It was just a beautiful experience. A resident helped “catch” the baby with the guidance of my midwife. She made sure he didn’t cut the cord and that he placed the baby immediately on my tummy. Joseph was perfect. He was covered in vernix and cried some at first. Once he was on my tummy and I was keeping him warm with a blanket he settled down. He received Apgar scores of 9 & 10.

The midwife had my husband cut the cord after about 5 minutes because they wanted to make sure I wasn’t going to have any bleeding troubles. The placenta came out about 15 minutes (at the most) after the baby was out. Everything was intact and looked good. They gave me a dose of Pitocin just to be safe. After losing so much blood last year with the miscarriage I consented to this intervention. I took Arnica and Rescue Remedy immediately after the baby was born, and I have to say I felt really good. My dad said it seemed like I hadn’t even been through labor because I looked so good.

Joseph started nursing as soon as the nurses weighed him and got him cleaned up a little. He nursed on both sides for a long time. I was overjoyed to have that bonding time with him.

Julia was so excited to have been with me, and said “Let’s do that again!” I told her she would have to wait a while, but I honestly would love to do that again, too. I don’t know if we will be blessed by another baby, but I would be thrilled if we are. Just not right now. 🙂

My boys got to come in pretty soon after Joseph was born. James was very excited, but Joshua wasn’t too sure about everything. He didn’t want to get too close to me at first, but he later warmed up to me. He still wasn’t sure about the baby until we brought Joseph home the next day.

Joseph was born at 1:04 p.m. He weighed 7 pounds and 13 ounces. He was 21 inches long. He came 13 days before his due date, but it was perfect timing as far as I am concerned. Our family has truly been blessed this Christmas. God is awesome!

Janna had her first ever basketball game tonight,