I have been thinking about making my own vanilla ever since I read about it over at Heavenly Homemakers. I finally decided to go for it when I read Amy’s post at The Finer Things in Life.

I had been using real vanilla for several years after doing a little research about imitation vanilla and trying to use more natural ingredients in our cooking.  Vanilla can be expensive to buy, so I thought it would be fun to try to make it myself.  It also might make good Christmas gifts. 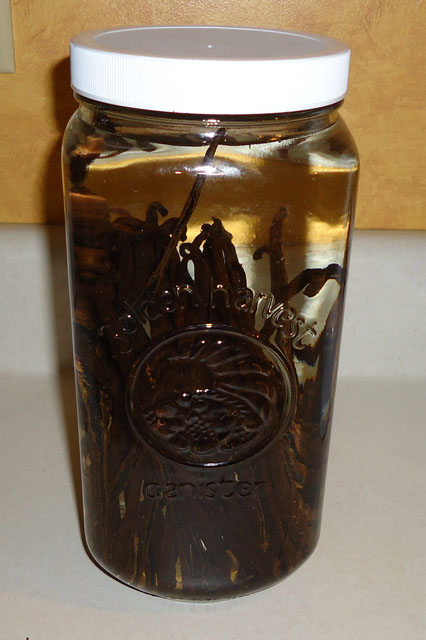 So, I ordered some vanilla beans

and asked my husband to purchase the other ingredient needed to make vanilla.

I wrote a list for my husband since he does most of the grocery shopping.  He looked over the list and then questioned me about one specific item on the list.

Yes, you read that right.  A very pregnant me asked my husband to purchase vodka at the store a few weeks ago.

I explained why I needed him to purchase it, so he went to the store one morning before work to get 1 1/2 gallons of vodka so I could make a bunch of vanilla.

Since he was at Walmart before 7:00 a.m. trying to purchase alcohol he was told he would not be able to buy it.  ?  I guess Walmart doesn’t sell alcohol before 7:00 a.m.

Not even for men who are trying to oblige their pregnant wives who want to make vanilla. 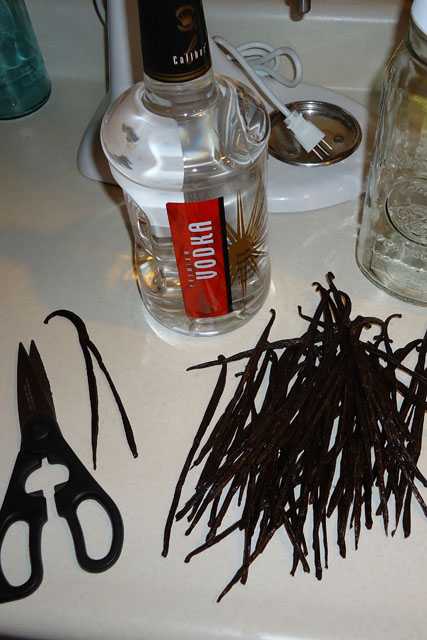 Well, as you can see he was able to later purchase the vodka and I was able to make the vanilla.

To make the vanilla I used my kitchen scissors to cut up the middle of each vanilla bean.  I then put 40 of the beans in a half gallon jar and added a 1/2 gallon of vodka.  I have it stored in my basement pantry and will shake it every so often for the next 4-6 months. Then I will strain it and put it into smaller bottles.

I think this will definitely be more potent than the vanilla I have purchased at Aldi’s which contains other ingredients besides alcohol and vanilla beans.

I sure never thought I would ask my husband to purchase alcohol or to post about it on my blog.  But, I thought maybe one of you out there might just be interested in making your own, too.  You just never know what you might find me talking about.  🙂

Enough about that.  Here is my menu plan for the week.  What are you serving your family this week?

I am linking this post to Menu Plan Monday at Organizing Junkie.

« The Garden To Be
Baby Basics: Newborn Skin Conditions »